As part of GKH’s series of presentations on the United States Constitution and Bill of Rights, attorneys Dwight Yoder and Sheila O’Rourke are offering a number of seminars on the history of slavery and racial discrimination in the United States. The first presentation on May 15, 2019 was entitled “Abolishing Slavery, Part 1: A Closer Look at America’s Original Sin.” Attorneys Yoder and O’Rourke reviewed the history related to the enslavement of Africans in the British Colonies, including the horrific human toll and consequences of slavery. They then reviewed how the founding documents of our country along with federal and state laws legally protected the enslavement of Africans as chattel property, which ultimately resulted in the Civil War. 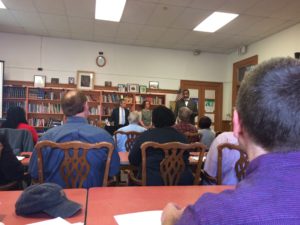 The presentation was held at the Bethel African Methodist Episcopal Church Cultural Center at 512 East Strawberry Street in Lancaster. Along with Bethel AME’s minister, Reverend Edward Bailey, attorneys Yoder and O’Rourke welcomed a diverse group of more than 50 attendees. The discussion was thoughtful and candid. Many participants expressed interest in continuing the discussion around topics of racial discrimination in a small group setting. The first of these small group meetings is tentatively scheduled for Wednesday, October 9, at Bethel AME Church.

On September 18, 2019 at 6:30 at the Bethel AME Cultural Center, Attorneys Yoder and O’Rourke will present the second seminar in this series entitled, “Abolishing Slavery, Part 2: The Reconstruction Era Amendments.” This seminar will cover adoption of the 13th, 14th, and 15th Amendments to the United States Constitution. These amendments were adopted after the Civil War and appeared to eliminate enslavement and guarantee equal protection, citizenship, and voting rights to African Americans. However, these freedoms and rights were nullified by state laws in both the north and south, enabling the continued enslavement of African Americans and denial of their constitutional rights. 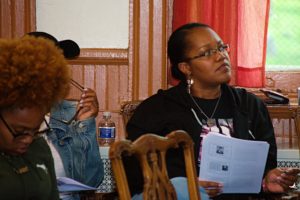 “Abolishing Slavery, Part 3: From Jim Crow to the Civil Rights Movement,” will follow the legal developments after the end of the Reconstruction Era, including the Supreme Court’s decision in Plessy v. Ferguson that upheld racial segregation as constitutional. This decision led to the wide-spread adoption of “Jim Crow” laws that subjugated African Americans to legalized discrimination in order to maintain a de facto system of enslavement.

For more information on this series, contact GKH. The presentations are free and open to the public. For planning purposes, pre-registration is appreciated but not required.