After several iterations and no shortage of political posturing, the Tax Cuts and Jobs Act has been passed by both houses of Congress. All that remains for the bill to become law is the President’s signature. The expectation was that President Trump would sign the bill before year-end, but that is unlikely unless 60 Senators agree to waive the pay-as-you-go budget rule that would cause automatic spending cuts to Medicare and other programs. The pay-as-you-go rule is intended to prevent a rise in the deficit by requiring an offset when legislation would result in increased spending or decreased revenue.

There has already been extensive analysis of the law relating to its long-term economic impact and its effect on businesses and individuals. The Tax Policy Center, for example, reports that the percentage change in after-tax income for virtually every category of earners is greatest in 2018, with the largest increase going to taxpayers in or above the 95th percentile. The percentage change in after-tax income decreases in 2025, and then essentially drops to zero in 2027, except for the top one percent of earners, who are expected to see a modest increase. Only time will tell which predictions are correct, but it is likely that the bulk of the tax savings will go to the highest income earners and taxpayers who have amassed significant wealth.

Some of the key provisions of the bill relating to individual taxpayers include the following:

Individual Tax Brackets. The number of tax brackets remains unchanged at seven, but the tax rate applicable to each bracket is reduced, except for the lowest bracket. The new rates are effective beginning in 2018 and will continue through 2025, after which they are scheduled to be repealed. The old and new rates are as follows: 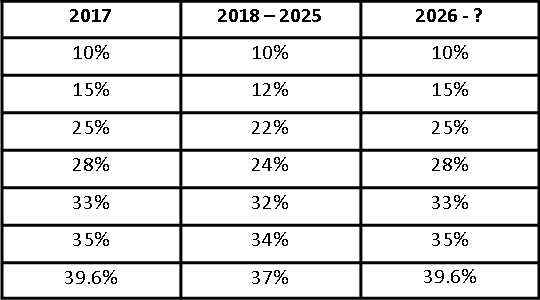 Increase in Standard Deduction. The standard deduction, which is available to taxpayers who do not itemize, is increased to $18,000 for head-of-household filers, $24,000 for taxpayers filing a joint tax return, and $12,000 for all other filers. These figures are effective for tax years 2018 through 2025 and will be adjusted for inflation beginning in 2019. Generally speaking, the rules governing whether a taxpayer has a return filing requirement are now based on whether the taxpayer has income in excess of the applicable standard deduction.

Medical Expense Deductions. The deduction for medical expenses remains available for those taxpayers who itemize deductions, with some modifications. In 2017 and 2018, for all taxpayers, regardless of age, medical expenses must exceed 7.5% of adjusted gross income in order to be deductible. In tax years beginning in 2019 and later, the floor for deductibility increases to 10%.

Limit on Deduction for State and Local Taxes. The bill provides that property taxes and state and local sales taxes are no longer deductible unless they are paid in connection with the operation of a trade or business or the production of income. State and local income taxes are no longer deductible in any event. However, an exception in the law allows a taxpayer to deduct up to $10,000 in the aggregate for property taxes (even if not paid in connection with a trade or business or the production of income) and state and local income and sales taxes. Like so many of the other changes that apply to individual taxpayers, this rule is effective only for tax years 2018 through 2025. One note of caution: the final bill contains language that prevents taxpayers from pre-paying state and local income tax in 2017.

Modification of Home Mortgage Interest Deduction. Prior law permitted a deduction for home mortgage interest for up to $1 million of mortgage debt (for taxpayers who are married and filing jointly). For mortgage debt acquired before December 15, 2017, this deduction remains unchanged. But for mortgage debt acquired after this date, the limitation is reduced to $750,000. In addition, the deduction for interest paid in respect of home equity indebtedness is suspended. These changes are effective for tax years 2018 through 2025. Note that the House proposal to limit the home mortgage interest deduction to one’s principal residence did not make it into the final bill.

Modification to Charitable Contribution Deduction. The bill increases the income-based percentage limitation for charitable contributions from 50 percent to 60 percent. In addition, under prior law, an exception existed to the rule requiring a charitable contribution to be substantiated by a contemporaneous written acknowledgement prepared by the donee organization. The bill eliminates this exception. The bill also eliminates the charitable deduction for payments made to a college in exchange for seating at an athletic event. The original House bill also included a provision that would allow the charitable mileage rate to be adjusted for inflation, but this provision was omitted from the final bill.

Deduction for Personal Casualty Losses. The bill provides that personal casualty losses that are sustained in 2018 through 2025 are deductible only to the extent attributable to a federally declared disaster.

Miscellaneous Itemized Deductions. All miscellaneous itemized deductions that are subject to the 2-percent AGI floor are suspended for tax years 2018 through 2025. These include expenses for the production of income, such as investment fees, as well as unreimbursed employee expenses, such as professional dues and educator expenses.

Repeal of Overall Limitation on Itemized Deductions. Prior law causes itemized deductions to be phased out above certain income thresholds. The bill eliminates this phase-out for tax years 2018 through 2025.

Repeal of Alimony Deduction. Beginning in 2019, alimony (and separate maintenance payments) will no longer be deductible by the paying spouse and will no longer be considered income to the spouse who receives the payment.

Exclusion of Gain on Sale of Principal Residence. The final bill does not change this exclusion, despite earlier versions of both the House and Senate bills including language to reduce the frequency with which this exclusion could be used.

Changes to Educational Tax Provisions. The American opportunity tax credit and lifetime learning credit are unchanged. Section 529 plans are now permitted to distribute up to $10,000 per student per year for tuition for enrollment in elementary or secondary school. Certain expenses for home-schooling may now be paid from a 529 plan. Student loan interest remains deductible, subject to a phase-out beginning at $135,000 for married taxpayers who file jointly. The deduction for qualified tuition was set to expire after 2016, and the bill does not change that expiration date.

Estate and Gift Tax. The estate and gift tax exclusion amount increases from $5 million to $10 million (indexed for inflation beginning in 2011) for tax years 2018 through 2025.

Elimination of Shared Responsibility Payment. The tax that applies to individuals who do not maintain minimum essential health coverage is eliminated. This change is effective for tax years beginning in 2019.

There are dozens of other changes in the law that affect individual taxpayers. Some of these relate to the kiddie tax, moving expenses, gambling losses, retirement plan distributions, IRS levies, and even the qualified bicycle commuting reimbursement. Next month, look for a discussion of business tax reform.

DISCLAIMER: The foregoing does not constitute legal advice and has been prepared for informational purposes only. Please contact us directly with questions about how these and other nonprofit laws and procedures relate to your specific organization.